Discover information on working a ski season at Edmonton and browse winter jobs.

Edmonton Ski Club is located in downtown Edmonton, in Alberta, Canada. It is about a one and a half hour flight from Vancouver on the west coast and a three and a half hour flight from Toronto in the east. Once you’re in Edmonton, local bus and rapid transit services are readily available to get you to the mountain, thanks to its proximity to the downtown area. Edmonton Ski Club also tries to set up ride sharing for local and international seasonal workers.

Edmonton is the capital of Alberta, Canada, as well as its second largest city, with a population of 1.2 million. It is a lively city with all the usual amenities of a city, tons of nightlife and it plays host to a wide range of music, arts and cultural festivals throughout the year. These include the Edmonton International Film Festival in September and October, the Silver Skate Festival in February and the Sonic Boom music festival in September, as well as many others. 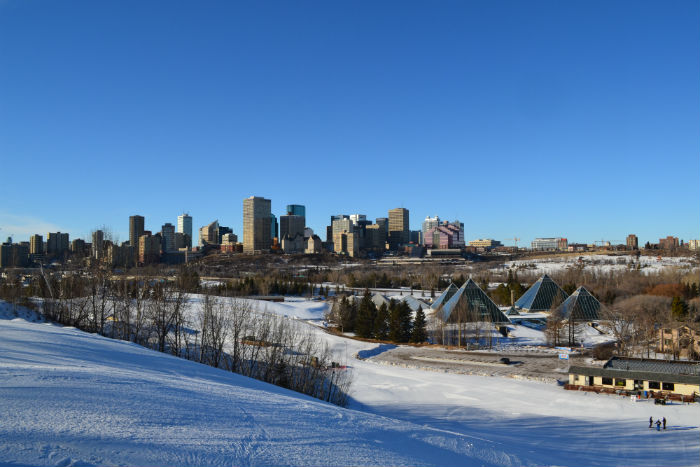 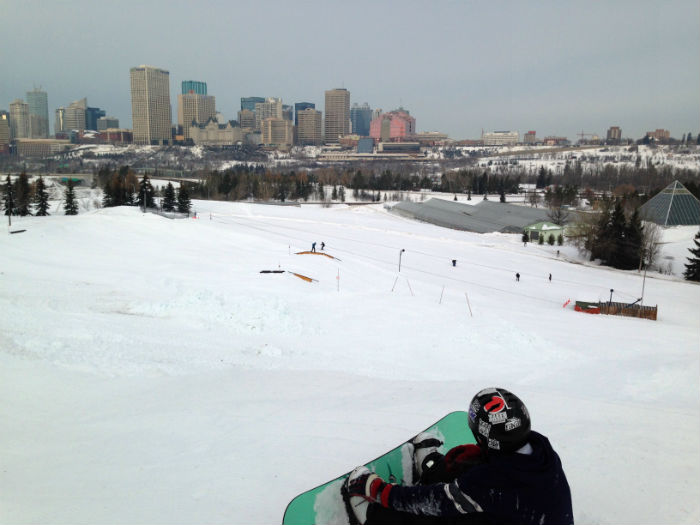 The Terrain at ESC

The Edmonton Ski Club is a learn to ski or snowboard training facility. There are 6 ski runs and 4 surface lifts which run on the river bank of the North Saskatchewan River, as well as night skiing and a base lodge.

The 6 runs at Edmonton Ski Club are all beginner to intermediate level, as the Club caters mostly to local residents looking for some fun and exercise after work or on the weekend. However, it also offers a terrain park with plenty of jumps and rails which is probably the best in the city. In addition, the Club hosts a freestyle club as well as an alpine racing club during weeknights, where professional athletes often come to train. Watching the athletes train is amazing. Average snowfall varies from around 100 to 200 cm. Winter season dates are anytime after Nov 15th to March 22 or 29th.

Personal Experiences of Working at ESC

From a personal point of view, so glad I decided to come to Edmonton. I had such a fantastic winter and even made some money. Met lots of great people and skied or boarded a lot. There are workers from all over the world. In 2013, international staff came from Lithuania, Germany, England and New Zealand. Hill is small but tons of fun and it’s great to be in a city rather than isolated in the mountains. Besides we get to go to the mountains and party every Monday.

All types of jobs are available at Edmonton Ski Club, from ski and snowboard instructors, to food and beverage staff all the way to administrative workers. ESC takes on both certified and non-certified ski and snowboard instructors. To apply, send your resume to [email protected]. Interviews are conducted through Skype or via email for international applicants. You are able to submit your application at any point throughout the year, as the Club continues to grow.

However, international applicants will be required to get their own Canadian working visa as ESC does not sponsor applicants for visas. To obtain further information on getting visas (including working holiday visas) to work in Canada, head to Work a Canadian Snow Season

There are also plenty of jobs available in downtown Edmonton. The oil industry (at the Alberta tar sands) has the economy booming in Edmonton at the moment.

Average wages in Edmonton are among the highest in the country, and pay at the Edmonton Ski Club is on par with, if not higher than, most local Edmonton ski hills. This means a ski instructor will earn around $16 an hour. On the job training is provided to all new staff, particularly for instructors who are teamed with experienced staff and offered the opportunity to improve their skiing or snowboarding by participating in sessions with the Snow School director or other instructors. Snowboard instructors train with the Club’s certified snowboard instructors.

Plenty of perks are provided to staff of the Club. Ski/snowboard rental and lessons are free, along with snow tubing tickets. Training and uniforms are also provided free of charge. 50% discounts are provided to immediate family members on skiing, renting and lessons. ESC organizes regular trips for its employees down to the Rockies to ski big mountain on days off. Last season they took staff on trips to Marmot Basin in Jasper, and Sunshine and Lake Louise in Banff which was awesome to rip it up on large mountains.

For full-time staff, skiing at Marmot Basin (which is a large alpine ski area located nearby) is free, while part-time staff receive a 25% discount. Further discounts are available at a number of other mountains, including Banff-Lake Louise-Sunshine, and Castle Mountain, Alberta. You can also stay for reduced rates at Best Western in Canmore and Jasper.

Getting Accommodation for the Season

Finding shared rental properties can be done through the Edmonton Ski Club Facebook page, as well as through local papers such as The Edmonton Journal  or The Edmonton Sun. Check out Work a Canadian Snow Season for more information on rental sites in Canada.

There are staff parties at the beginning and end of season… and most weekends on Sundays as ESC is closed Monday. They host regular alpine race and freestyle events, as well as rail jams and other parties (such as Valentine’s Day parties).

Outside of the ski fields, however, the city of Edmonton offers tons of activities. It is a short 10-minute bus ride from the Club to downtown Edmonton, where there are plenty of pubs, bars and clubs. Some of the most popular include On the Rocks, Hudsons Canadian Tap House, and Union Hall Nightclub. There is also outdoor ice-skating (former largest in North America) and the current largest shopping mall in North America, the West Edmonton Mall. There are plenty of music, arts and cultural festivals throughout the year to keep you entertained.