Work A Ski Season in Zermatt

Discover information on working a ski season in Zermatt and browse winter jobs.

Zermatt is home to the famous Matterhorn, the stunning, craggy mountain that rises to 4500m at its peak and is one of the most recognizable and photographed peaks in the European Alps. Zermatt is linked to the Italian resort of Cervinia. 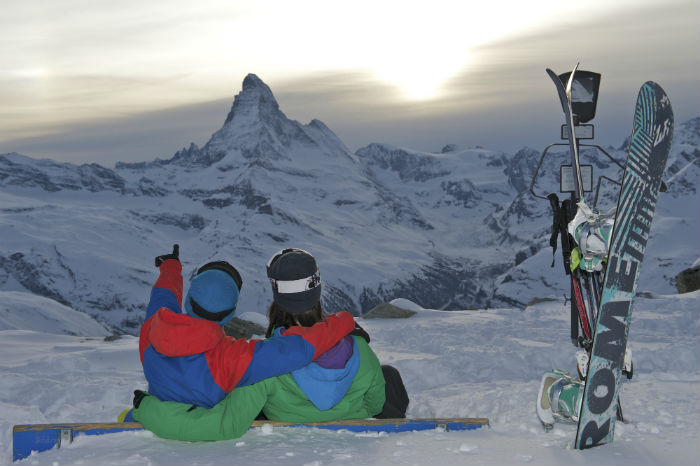 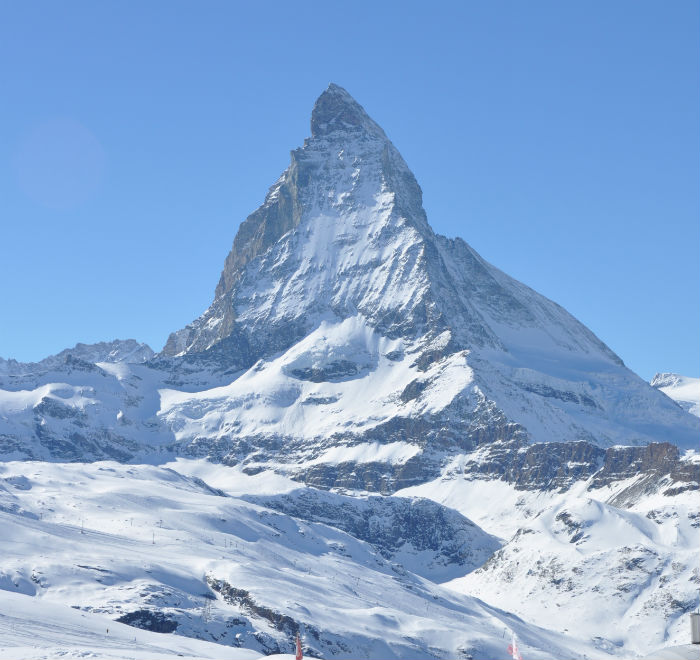 Zermatt has a long history with the first inhabitants dating back to 1300. Today, Zermatt has a year-round population of around 5,700 people and the capacity to accommodate up to 22,000 visitors.

Visitors reach the alpine village by train as there is a no car policy in town, which gives the town a relaxed feel.

Zermatt generally attracts richer clientele and has a correspondingly chic feel with a number of high-end shops selling high-end fashion and fancy restaurants which can be a drain on a seasonal worker’s wallet!

There are 20 upmarket restaurants in town, which combine for a total of 248 Gault Millau points. The hotels and architecture are alpine chic, combining stone, glass and often old and well-kept wood. This makes Zermatt one of the prettier alpine villages in Switzerland.

Given that the only way in and out is by train (unless you have a special permit for a car), Zermatt has a more remote feel to it. Season workers tend to spend more time in the village than they may otherwise do at other resorts for this reason.

The closest major resort is Saas Fee which is one and a half hours away for a day trip, but seasonal workers only tend to do this a few times per season at most.

Does Zermatt Have Enough Terrain to Last a Season?

Zermatt is comprised of three mountains – Zermatt, Cervinia and Valtournench.

Zermatt has the honor of being one of the few resorts in Europe with skiing and snowboarding 365 days of the year, due to the skiing on the Theodul Glacier. The summer skiing area includes 21 kilometres of runs with guaranteed snow, although this glacier terrain is geared more towards beginner riders.

The winter season offers 360km of on-piste slopes from early in the morning until late afternoon, both on the Swiss as well as on the Italian side of the Matterhorn (named Monte Cervino). Zermatt’s terrain has less for beginners (many of the ‘easy’ runs are quite difficult by standard ‘easy’ ratings), but intermediates and beyond have plenty to explore.

Glacier riding is a big part of Zermatt and 70% of the on-piste runs in winter are either covered in artificial snow or are on a glacier. Make sure you are with a guide if charting into glacial territory due to the possibility of crevasses. Doing avalanche training early in the season will allow you to make the most of the mountain.

In addition to the on-piste terrain, Zermatt is famous for its off-piste terrain. The cable car to the Matterhorn glacier paradise (Klein Matterhorn) is the highest in Europe, and 9 of the peaks around the area rise to over 4000m.

The season pass at Zermatt does not work at Cervinia unless you buy an upgrade, however there is more terrain on the Swiss side.

Take care around the Klein Matterhorn area at it is glacial. Towards Garten, work your way into the back bowls for some sweet riding. Gornergrat has a new bubble from Furi, but take the train on sunny days occasionally to take in some of the stunning Zermatt surroundings. An awesome run goes from the top of Geornergrat down the left of 9a and in between the K1 T-bar and the 9i run. Stockhorn is another off piste area when the snow is good and Sunnegga is good after a fresh dump.

Mountain Stats (Nb. In Switzerland, blue slopes are the easiest, followed by red, yellow and black)

The average is 3 – 4 meters of snow during the winter season, which is supplemented by artificial snow. The average temperature in January is -5.5 Celsius.

Zermatt is one of the sunniest areas in Switzerland in terms of sunny days per year according to MeteoSchweiz, the Swiss Meteorological Office. Spring is the best time in Zermatt because of warmer weather, longer daylight and good snow. On average, one in four days should start with fresh powder.

Zermatt has a division between the terrain above 2000m and that below. Above, the monthly snow average is pretty good, but below that point Zermatt uses a lot of snow-making to get the snow base up. Many of the advanced areas of the mountain open in January and the peak period is January to mid-March.

There is usually great riding to do above 2000m until the end of the winter season, while below that level the riding can get patchier towards the end of the season. From May onwards, it is only possibly to ski on the glacier up high.

The Snowpark Zermatt has one half-pipe, 14 jumps, three rails and three boxes. The Freeride Stockhorn is a mogul piste slope under Stockhorn on which is great to practice moguls skiing. There is also a beginner’s mogul run under Rothorn.

Getting a Job and Working at Zermatt Mountain Resort

Speaking German will, in many cases, be required as you will be interacting with the (mostly German-speaking) customers. However, if you look at some of the job titles, very often they are looking for English speakers (Sprachen – en) so it can be worth a shot to send in an application.

You should send your application around September for the winter season.

For people working on the mountain, you can expect around 3000 francs a month.

For those working at tour companies, the majority of the guests come into Geneva, around three hours away. Often there are delays, but there is always another rep to talk to at the airport.

Where the Other Staff Come From

The majority of the seasonal workers in town are Swiss, although you will come across a large number of British. There are also quite a lot of Italians given that Zermatt lies on the border with Italy.

Getting a Place to Rent in Zermatt

It is extremely difficult to find accommodation in winter for the season. While you are looking for accommodation, there is a backpacker lodge and a hostel in town.

You should start looking early for accommodation, otherwise you will be stuck in a pricey chalet. If you have the time available, it is not a bad idea to arrive in summer and look for a place then. Zermatt has plenty of summer activities and you can even warm up for the winter season riding the biggest summer ski area in Europe on the glacier.

The tourist office is a useful place to start as landlords post season rentals for season workers – email: [email protected].

www.zermattskichalets.com/season-rentals is another useful place to start. They can also be contacted at [email protected]

The main supermarkets in Zermatt are the Co-op and the Migros, both in the center of town. The butcher who is on High Street is fantastic so you should make friends with him for some quality cheaper meat. Tony Julen is a wholesaler for fruit and veg and is generally cheaper than the supermarkets. The bakeries deliver bread to you each day if you are in a chalet.

Winklematten and Moos are the most difficult places to live in terms of being able to get into the village, although they are close to the Klein Matterhorn lifts.

Julen Sport has one of the best selections of clothes and equipment, while Matterhorn Sport is another good place for gear or to get your skis or board tuned.

There are 55 bars, 109 restaurants and 50 mountain restaurants at Zermatt, of which many are upmarket and a smaller number are dive bars and cheaper places to hang out. Zermatt has a huge nightlife and there are parties and other activities every night of the week. The famous nightlife is one of the reasons Zermatt has so many visitors.

Events and Other Tips for Zermatt

Zermatt is a beautiful hiking area and there are 70km of walking trails in winter and 400km for those who are around in summer.

The Swatch Skiers Cup takes place in Zermatt and is a fantastic freeride event with amazing riders.

Zermatt has a cinema, the Matterhorn museum, an indoor ice rink and an outdoor ice rink and 19 curling rinks for activities outside skiing. There are a large number of events and festivals throughout the season including a mountain film festival, the Zermatt Festival – a classics and art festival with the soloist and ensembles of the Berlin Philharmonic (and music around the mountain including up to 2,222m), and Zermatt Unplugged which attracts rock and other musicians.

If you can save up a bit of money, heli-skiing is legal in Switzerland and there are operations out of Zermatt with one helicopter company. It’s the most glorious day you’ll ever have on skis or board. The Luttman-Johnson race is quite cool, during which you have to check into as many mountain restaurants as possible on the run down. It is run by the Ski Club of Great Britain. The Triftji Bump Bash is a huge mogul comp held in April.

Head over to Chamonix if you can make it for the “Boss des Bosses”. They get season workers from Zermatt, Courchevel, Meribel and Val Thorens (The Three Valleys) to compete against Chamonix. This event goes back years to when Chamonix challenged the guys at Val Thorens to ski races. Today it’s a day out with a lot of different ski events and is tons of fun.

Tobogganing Apres-ski is really popular. You take the last lift up (they let you do this!), then toboggan down stopping at all the mountain restaurants for drinks.