Sun Peaks is proudly an intermediate cruiser’s resort. With the second largest skiable terrain in Canada behind Whistler, Sun Peaks will have you carving for days during your season. Given the lack of crowds and that several runs are three cars wide and fast, on certain parts of the mountain it’s like playing on a runway.

But don’t come to Sun Peaks expecting huge Canadian big mountain terrain or huge nightlife. Sun Peaks is for those after a relaxing time on the mountain, and it leaves the big mountain terrain and heaving nightlife to other British Columbia resorts. In addition, while the snow is nice and fluffy, the snowfall is lower than at other BC resorts, although the sparse crowds certainly help in that respect.

Sun Peaks is located in British Columbia, around 45 minutes from the town of Kamloops. It is 4.25 hours north-east of Vancouver (407km/235miles) and 2.75 hours (246km/153miles) north of Kelowna. The closest airports are at Kamloops and Kelowna. However, if arriving internationally, you will likely arrive at Vancouver airport.

One of the back highways that takes you to Sun Peaks is through Canada’s “death valley” – where they film “Ice road truckers” and is absolutely terrifying. This is not a recommended route in – keep to the main roads if you’re driving!

Buying a car in British Columbia is very easy and second hand cars can be cheap with many suitable second hand SUVs with 4×4/AWD options for less than $2000CAD. Once the ownership has been transferred to you, you can register the vehicle at any Autoplan broker, which are as abundant as fastfood places.

Bear in mind that if you do purchase a car, selling it outside British Columbia but within Canada will be more difficult. If you’re planning on doing a road trip to the USA after your time at Sun Peaks remember it is very difficult to sell a car from British Columbia, or Canada in general, in the USA. You will need to take the car back to Canada to sell it or be prepared to waste weeks of time and up to several thousand dollars trying to import it correctly. See Insurance Corporation of British Columbia – visiting BC 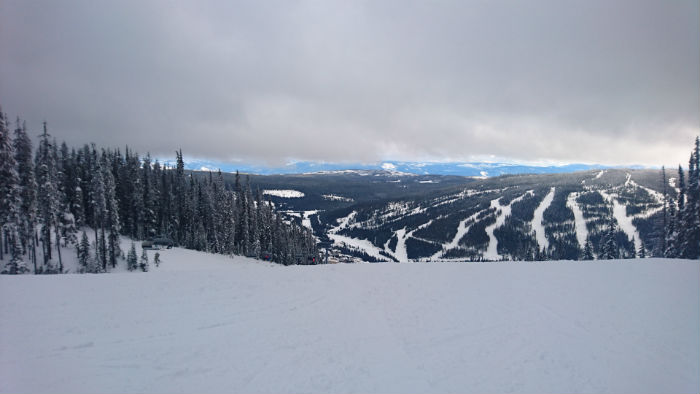 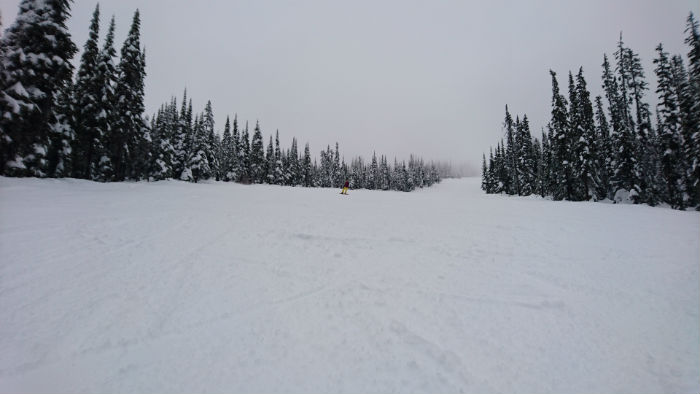 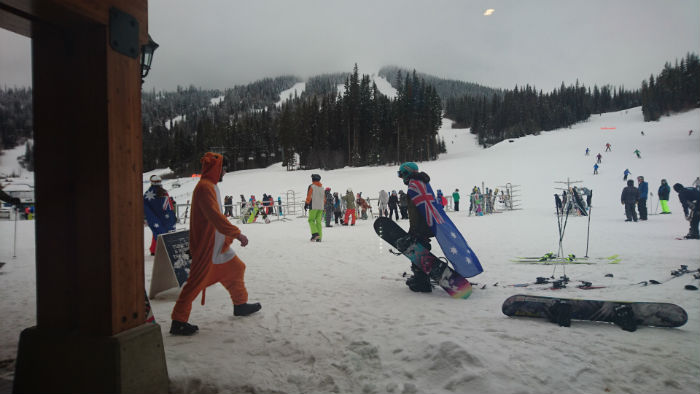 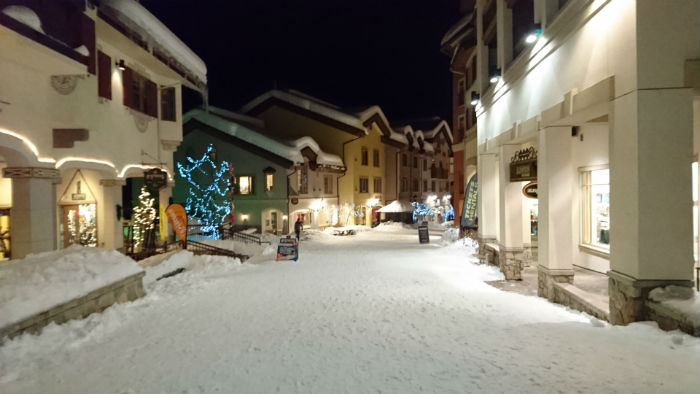 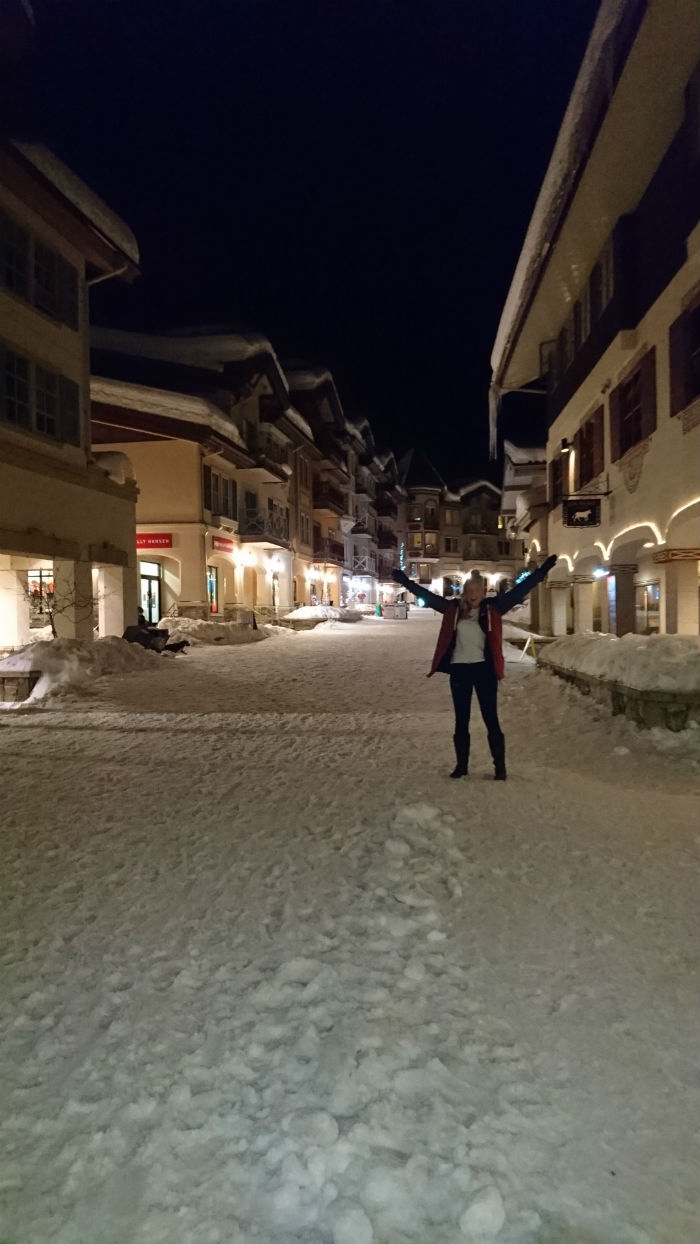 While it therefore might lack the authenticity of some of these old mining and mountain towns, it is nonetheless an incredibly pretty little town that resembles a German village (or even a gingerbread village!).Sun Peaks aims to attract families and older people on holidays. For kids, there is plenty to do and lots of family-related activities are available around town. There are a number of nice restaurants around the village for a relaxing evening and you will find the Canadian staff very laid-back and friendly.

In addition, the hardcore ski bums are really nowhere to be found at Sun Peaks, given the family vibe and overall intermediate terrain. Among seasonal workers, you will likely find a mix of relaxed locals and plenty of international staff from Europe, Australia, New Zealand and South America. Still, for seasonal workers, there is a fun vibe and quite a lot of other young people around.

While Sun Peaks is not the party central of Canadian ski resorts – at least not on a par with Banff or Whistler – there are several good spots for après-ski and late night revelry.

Intermediate terrain is found in copious quantity at Sun Peaks with less in the way of beginner or expert terrain.

Sundance Mountain is the best beginner area on the mountain. But this area has just a couple of long green runs, with the other runs in this area being intermediate. Beginner seasonal workers will need to progress their technique quickly in order to explore the rest of the mountain which is overwhelmingly intermediate.

At least Sundance is separated from the rest of the resort so you don’t need to worry about speed-freaks crashing into people on the bunny slopes.

Sun Peaks is made for intermediates and once you progress to intermediate standard, you can go almost anyway on the mountain. Sun Peaks is therefore a good mountain to work if you want to develop your technique over a season as an intermediate rider.

Mt Morrisey, Mt Tod and Sundance all have long, long intermediate runs to cruise your way around the mountain. The blue runs off the Sunburst chair, ‘Blazer’, ‘Cruiser’ and ‘Exhibition’ are wide and fast.

From the Morrisey Express, there are a number of runs to take which are all nicely groomed each day and the sparse crowds mean you can gather some nice speed. There are some well-spaced trees to explore here as well for some tighter turns.

Sun Peaks has less in the way of expert terrain than other BC resorts.

On-piste, there are at least a few steep groomers to gather speed at work on technique. There are also some nice gladed areas, particularly off the Sunburst chair as well as going down to the base of Burfield. However, the lack of snow at Burfield compared to other parts of the mountain means these areas get a bit patchy.

For those who like bumps, these are found all over the mountain, some of which seem to go for ages so boarders beware.

At Mt Tod, at the top of the Crystal Chair, as well as off the Burfield chair, there is a bit of bowl skiing to be found. These areas are nice after a dump of snow, although the steep sections are quite short.

However, apart from the bowl riding, there is really nothing particularly challenging at Sun Peaks and certainly nothing in the way of big mountain that is found at other BC resorts such as Revelstoke or Kicking Horse.

There are also not a ton of backcountry options at Sun Peaks. Gil’s, past Mt Tod, has a little bit of terrain to hike and tackle and can be nice although the pitch will be short lest you have to hike back up to the resort. Also, through the trees off to the right of Burfield can be nice if there is enough snow. Make sure to take avalanche precautions.

The terrain park is the Rockstar Energy Terrain Park and it is found along the length of the Sundance Chair. This is a kick-ass 10 acre park with plenty of hits and features for beginners as well as a few intermediate features. Frankly though, it’s not really an expert’s park, which goes with the vibe of the rest of the mountain. Sun Peaks also features a large number of random jumps and bumps off the side of runs.

Crowds are virtually non-existent at Sun Peaks which means you can gather speed and make those huge turns much more easily.

Snow is not the strong point at Sun Peaks. Average snowfall is six meters, which is less than other BC resorts and the dumps tend to be small storms with small falls, rather than huge dumps.

At least the snow quality is well-retained due to the fact that many runs are north-facing, and the fact that the temperatures stay quite cold over winter. There is also excellent grooming and snowmaking at Sun Peaks which means that, on-piste at least, the lack of snow is not really an issue in terms of hitting rocks and dirt. Unfortunately, the most difficult terrain on the mountain at Burfield is also the area that gets the least snow.

Sun Peaks Resorts operates three branches of jobs. There are jobs with mountain operations, jobs with the Sun Peaks Grand Hotel and Conference Centre, and jobs with Sun Peaks Tourism which are long-term jobs that aim to promote Sun Peaks.

See www.sunpeaksresort.com/employment/job-opportunities for job openings with the resort.

Minimum wage in British Columbia is $13.60 an hour and most entry-level jobs will pay that amount.

Jobs with the Hotel and Conference Centre tend to get less ride time than the jobs with mountain operations.

Sun Peaks is a very welcoming place for international staff. There are heaps of Australians, New Zealanders and Europeans who come to work at Sun Peaks each year.

It is a relatively painless process to apply, even if you are overseas at the time. Sun Peaks won’t sponsor you for a visa so you will need to arrange your own working visa. See Work a Winter Season in Canada for further information.

There are a few staff accommodation options at Sun Peaks. The first is the Little Shuswap Lodge. This is shared accommodation, each unit having four bedrooms, a kitchen, a bathroom, and a common area. It is a bonus that you get your own room.

The units are fully furnished, though you need to bring your own linen and organise your own internet. The rent is $475 per month and is taken directly from your pay check. This is certainly a bit pricier than staff accommodation at other resorts but having your own room is pretty sweet.

The second option is the Whispering Pines Lodge which is accommodation in dormitory style rooms. You will need to share rooms here. These are furnished as well although, again, you need to organise your own internet. The rent is $375 per month taken from your pay check. Email: [email protected]

If you arrive without a place, the Burfield has cheap rooms while you look for a place.

Après-ski and nightlife is fun but not the biggest out of Canadian resorts by any stretch. Morrisey’s Public House is a nice place for a relaxing drink after work or a day on the slopes, while there are number of nice places for dinner such as the Steakhouse at Sun Peaks, Powder Hounds and 5Forty for wings and ribs.

For late night, The Club is the best place to go although it is not the craziest bar you will ever visit. There tend to be quite a lot of staff parties at Sun Peaks at night due to the quieter nature of the town.

If you have a car, Kamloops is a 45 minute drive away. It is a university town with much more in the way of pubs, bars and clubs as well as a much wider range of choices for restaurants. It also has a reputation for being a bit rowdy due to its student population!