Heavenly USA
Other US Resorts

With glorious views over Lake Tahoe, Heavenly is one of Lake Tahoe’s, and California’s, biggest destination resorts, even though it partly straddles into Nevada.

South Lake Tahoe and Stateline are towns at the base of the resort – SLT in California and Stateline in Nevada. With gambling legal in Nevada, Heavenly is one of the few resorts in the US where you can go to a casino after work – not that you there is much to gamble on a minimum wage!

Of the Tahoe resorts, Heavenly is best suited to intermediate riders and those who like trees as there is not much good expert terrain. Squaw and Kirkwood have much better expert and off-piste terrain. Unfortunately, Heavenly is pretty unfriendly to foreign applicants unless you go through a job partner program. The season runs late November to late April. 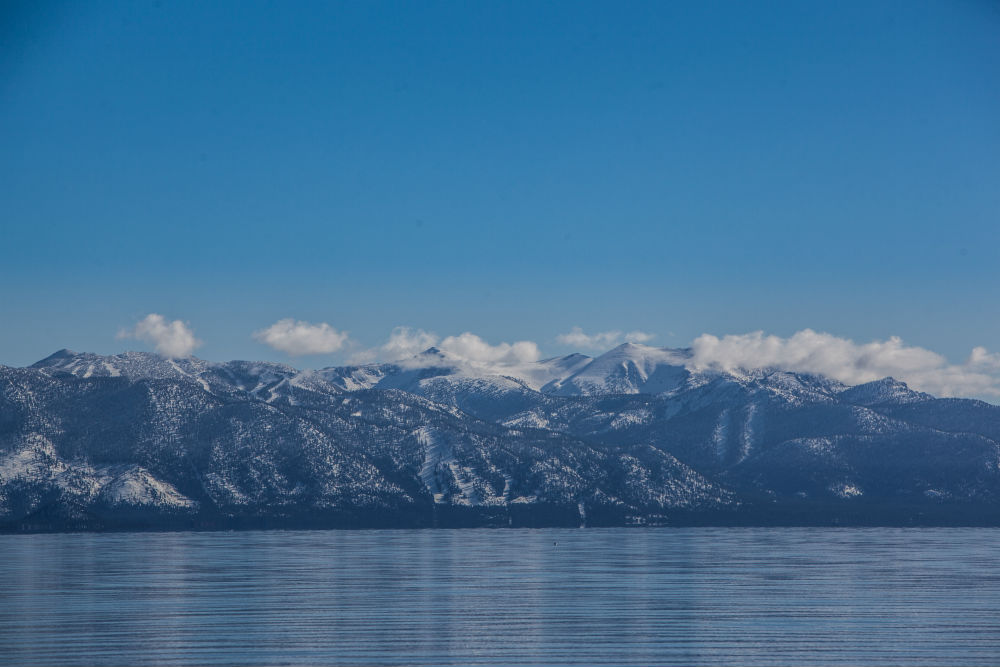 The closest airports to Heavenly are at Reno-Tahoe in Nevada and Sacramento in California. The drive from Reno is just over an hour while it’s 2 hours from Sacramento and 3.5 hours from San Francisco.

From both San Francisco and Sacramento, there are buses up to South Lake Tahoe with Amtrak. A one-way ticket from SF is around $60 while a one-way from Sacramento is around $35. Bay Area Ski Bus is another bus service from San Francisco. www.greyhound.com also runs services from SF to Reno.

If you arrive at Reno, you could take a shuttle from the airport with southtahoeairporter.com

If you have time on your hands but want to save money, you could go from Reno to Carson City by public bus using the RTC Intercity (See www.rtcwashoe.com/public-transportation-operations-88). From Carson City, you can catch the Blue Go Bus up to South Lake Tahoe. The whole trip can be one for around $10.

The Blue Go bus is a free shuttle service around South Lake Tahoe and Stateline, which runs down into Carson City. It runs from late November to early May and usually comes every 15-30 minutes. This bus takes you into work every day from anywhere in town, including all the staff housing.

The spectacular view over Lake Tahoe as you ride up the Gondola each day is one of the best aspects of working at Heavenly.

Heavenly has an unusual vibe for a ski resort. Being in Nevada, Stateline is full of casinos, live shows and other places to gamble. Après-ski is slightly different at Heavenly with casinos entering the mix of places to go after work or riding.

Heavenly has a more relaxed family-friendly and touristy vibe than Squaw/Alpine/Kirkwood given the terrain is overwhelmingly intermediate. Around Tahoe, the best seasonal worker riders tend to go work at Squaw / Alpine and Kirkwood, not Heavenly.

For staff, Heavenly is a little stricter than other resorts. For example, if you’re under 21, they make you sign a ‘non-drinking’ agreement.

Despite the large skiable area (4,800 acres / 1,942 hectares – the largest in California), the terrain at Heavenly is best for intermediates and those who like tree-skiing, with little in the way of big mountain terrain. The more challenging and technical terrain around the Tahoe area is at Squaw / Alpine and Kirkwood.

For beginner seasonal workers, there is enough to work on your technique, particularly as you progress up to intermediate. At the intermediate level, there are a ton of cruisers with basically every lift except Mott Canyon and Gunbarrel servicing intermediate runs. The runs are usually nicely groomed too, giving your thighs a real workout as you gather speed.

For advanced and expert riders, there is little in the way of super challenging terrain at Heavenly. Mott Canyon has a few nice, but short, pitches, but tends to get a lot of traffic on a powder day. Gunbarrel has another few short, steepish pitches. The only alpine bowl is Milky Way which, although above the trees, is quite pedestrian and often requires quite a bit of traversing to sight a decent line.

Heavenly is really about the trees for advanced riders, with most of the resort below the tree-line. The Ski Ways Glades, off the Sky Express, is a lovely place to carve some trees. The Dipper Woods is another nice place to weave between trees, but you can really duck in and out of the trees just about all over the mountains.

Under the Gondola, which is out of bounds, is also another spot for trees – just remember to take avalanche precautions if you do hit this area and go with a local first time around.

Heavenly has a small and medium park. The bigger park is under the Canyon Express chair meaning you can loop this all day if you want, or just do a couple of laps on your ride breaks. The medium park is actually bigger than just a ‘medium’ park with four separate lines to choose from and some relatively big hits, in addition to rails, boxes and jibs.

Average snowfall is 360 inches (9.1 meters) which is excellent by Tahoe standards. When it snows, it dumps down. However, Heavenly sometimes gets long, dry spells throughout the season and the snow can get quite icy. Also, Californian snow has a high moisture content which means it’s not nearly as fluffy as Colorado, Wyoming or Utah and tends to ice up a little more quickly. Snowmaking covers around three quarters of the resort. On a powder day, you will want to go straight to the shaded parts of the mountain as that’s where the best snow is.

Heavenly is part of the mega Vail resorts conglomeration which also runs Northstar and Kirkwood in California, as well as Vail, Beaver Creek, Keystone and Breckenridge in Colorado, Park City in Utah and Perisher in Australia.

Being such a large operation, there are generally plenty of jobs available at Heavenly. Just be presentable, and you have a good shot at a job. You can apply online at www.vailresortscareers.com by searching for Heavenly.

If you are in the Tahoe area, you can also just walk into HR and hand in your resume in person. The HR office is at the California Base Lodge, top of Ski Run Boulevard in South Lake Tahoe – open Monday to Friday, 8am – 5pm.

To fill up all the available positions, Heavenly runs a job fair each year in South Lake Tahoe. This is a great way to secure a job as you can interview for multiple positions on the same day and you’re pretty much guaranteed something if you present well.

Jobs that always need filling are food and beverage, retail and rentals and lift operations.

The fair is usually held in early November each year. You should also apply online for the fair beforehand if you can. All job listings, including information on the hiring fairs, can be found at jobs.vailresortscareers.com/.

Specific information on Heavenly is available at jobs.vailresortscareers.com/heavenly/content/The-Heavenly-Experience/

The Tahoe Daily Tribune has a classifieds list with jobs available in South Lake Tahoe. This is a good way to find a job in town if you don’t want to work for the resort itself.

It is very tough at Heavenly for foreign applicants. Heavenly won’t take H2B applicants. You may have a shot on a J1 visa through a work and holiday program such as CCUSA, CIEE or WorkUSE, although they tend to take a lot of South Americans.

Australians can get a J1 visa independently and may be able to apply directly with Heavenly. See Work a Winter Season in the USA for further details on the J1 visa.

Perks include a free season pass which includes free riding at Heavenly, Northstar, Kirkwood. It also includes Vail, Beaver Creek, Breckenridge, Keystone, and A-Basin in Colorado. You also get this for eligible dependents.

There are discounted tickets for the other Tahoe resorts. You can join in ski and snowboard lessons. You get 50% food discounts and discounts on equipment and retail, as well as half price for rentals (although these are marked up to begin with as they are mountain prices).

There is medical insurance for employees with more than 750 hours and +401k program.

There is employee housing near California Base Lodge. It has two or three bedroom apartments, with two or three people per bedroom. As a result, it’s tight.

Rent is $11.50 per day. It is partly furnished including with kitchen utensils. You need to be working at Heavenly for at least three months to be eligible.

Most staff, in fact, don’t live in employee housing, but rather in South Lake Tahoe or Stateline. This means you are living in a regular town with access to all the regular amenities and services such as supermarkets. The Blue Go bus gets you around quite easily, including to work in the mornings. You should expect to pay around $300 – $500 per room per month in a share house.

The Tahoe Daily Tribune often has rental listings in its classifieds section.

www.mountainnews.net/mountain-marketplace has classifieds if you need to buy things or you may occasionally get lucky with someone wanting a roommate.

If this doesn’t work out, there are a whole bunch of real estate agents in South Lake Tahoe and Stateline which will help you find a place to rent too.

Après-ski at Heavenly is good, with South Lake Tahoe coming alive at the end of a day’s riding or working.

There is also Stateline just across the border in Nevada, if you want to throw down your hard-earned in a casino. The casinos are a bit garish though, and really not that much fun – so you’re probably likely to spend more time in the bars with your workmates than in the casinos.

Whisky Dicks has live music and a bit of a country feel to it. Himmel Haus is a German themed bar with German and Belgian beers to throw back after a day taking snow to the face.

Rojo’s Tavern has BBQ and gets a dance floor and DJ later on. Over in Stateline, where the casinos are legal, you’ll find Peek nightclub for dancing into the night, and Xhale Bar for cocktails and dancing.

Lake Tahoe Community college is right in South Lake Tahoe and some staff take classes there after work some days. See www.ltcc.edu for courses and scheduling.