Work A Ski Season in Crans-Montana

Discover information on working a ski season in Crans-Montana and browse winter jobs.

Sitting high on a sunny plateau above Sierre, in the heart of the Swiss Alps, Crans-Montana is an idyllic ski town that offers its visitors wide panoramic views of the picturesque Valais Alps. The town, founded in 1893, is perched at 1,500 metres above sea level (with slopes reaching as high as the Plaine Morte Glacier at 3,000m), among a 200km stretch of snow-capped peaks including Mont Blanc and The Matterhorn.

Crans-Montana is renowned for its clean air – claimed to be the ‘purest in the Swiss Alps’ (according to SAPALDIA, a Swiss nationwide medical study) – and enjoys a hefty 300 days of sunshine per year on average. It is an upmarket resort, and caters to those who like to shop and eat well as much as those who like to ski.

The ski season runs from mid-November to mid-April on average, dependent on snow cover and conditions.

Ski season aside, the resort is also renowned for its world-class golfing facilities, and often plays host to international golf tournaments, including the annual Omega European Masters in September. 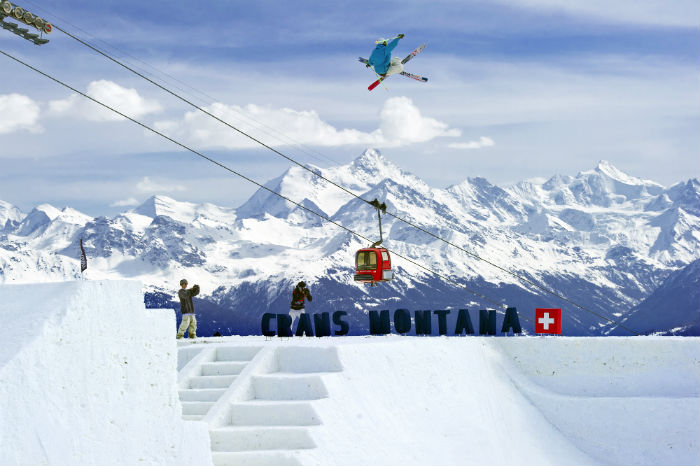 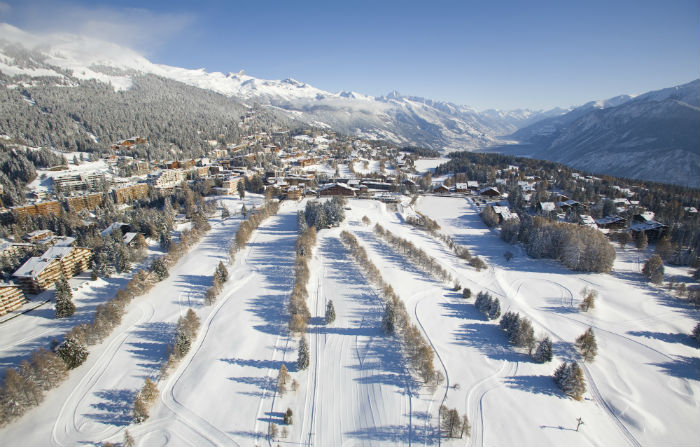 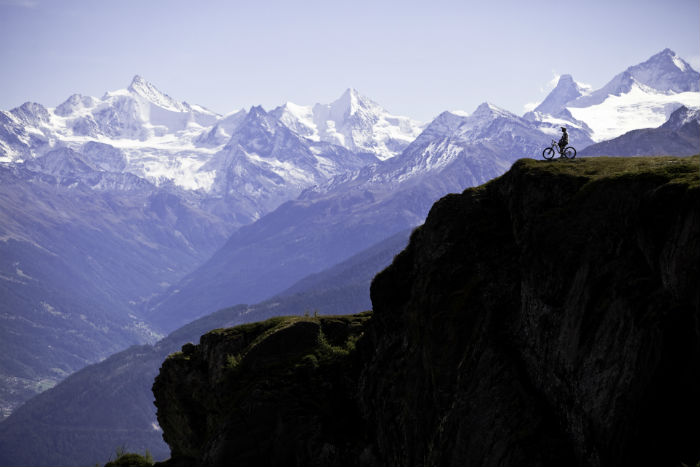 Getting There and Around

Crans-Montana’s nearest town centres are Sion and Sierre. 7,000-year-old Sion, capital of Valais and economic centre of this sunny region, serves as a convenient transport hub. It is home to Switzerland’s biggest bus interchange, servicing 26 destinations in the Valais area.

Sierre, its neighbour, is known as the wine capital of Switzerland; home to countless vineyards and a year-round calendar of wine-related festivals, celebrations and events. It takes just 12 minutes by funicular (cable railway – in this case, the longest in Switzerland) to get to the CFF train station in Sion (Switzerland’s major railway company), which in turn services all the major town centres in the region such as Basel, Bern and Lausanne, as well as Geneva, Zurich and Milan airports.

Buses to Crans-Montana run from both Sion and Sierre train stations (a 45-minute or 35-minute journey, respectively – see www.carpostal.ch and www.cie-smc.ch for more information). A taxi to the ski fields from Sion will set you back 90CHF while a taxi from Sierra will cost around 70CHF.

If coming internationally, Sion International Airport (Régional de Sion Valais Switzerland) is a short 30 km (or twenty-five-minute) ride away by funicular, or one hour’s drive in good conditions. Genève-Cointrin Airport is 185km to the west or around a 2 1/4 hour drive, while Zürich-Kloten airport is 300km to the north (3 hour drive).

Crans-Montana sits 15km away from the nearest main motorway, which will get you to and from Geneva, Zurich or Italy via the Simplon Tunnel.

The town plays host to a calendar of approximately 400 events per year, and is home to an estimated 180 shops and boutiques, making Crans-Montana quite the shopping mecca. Shops include everything from top-of-the-line designer clothing and jewellery, attracting the wealthier local and international crowds, to supermarkets, a post office and all the basic services. There are also over 70 restaurants.

As far as pubs, bars and parties go, there’s plenty of choice: for Jagerbombs, dress-up nights and live music, head to Bar Amedeus at Hotel Olympic; for beers and bowling, head to Bar Bowling; for a sneaky cocktail or post-ski wine tasting, head to L’42 meetlifebar; or for a party ‘til the wee hours, head to Le Pub Georges & Dragon.

Other after-dark hotspots include nightclubs Pacha Club and Sky Club, which put on regular parties and theme nights, and showcasing local and international DJs throughout the year.

The Caprices Festival, a pop/electro gathering, plays out in April each year, with the 2015 edition featuring well-known acts including Deep Dish, Digitalism and Luciano.

Other notable events include sporting showdowns such as the Alpine Skiing World Cup in March and the prestigious Crans-Montana Jumping International, equestrian event, while the Nuit des Neiges charity gala draws Europe’s well-known and well-to-do each year.

Outside of winter, the Omega European Masters of Golf is the most symbolic event. Every year in September, it unites the best players in the world at the Severiano Ballesteros 18 hole course.

How to Get a Job at Crans Montana?

Job listings for the winter season are available via several online resources:

For ski instructor positions, the below ski schools can be contacted directly via email:

Job listings for the winter season are usually live by September/October, excluding ski and snowboard instructing roles, which are usually listed earlier (by the end of August).

See Jobs Available at Mountain Resorts for a list of ski resort jobs and there descriptions.

You can expect to earn around 3,500 Swiss Francs per month for the lowest paid jobs at the mountain.

Face-to-face interviews are most common, however other options might be available depending on the role.

Ski and snowboard instructor hopefuls are able to attend a two-week instruction course to obtain their ‘basic level’ certificate prior to commencing with ski school.

Being that Crans-Montana is centred in Swiss wine country, some wineries in the area will often seek out seasonal workers in Autumn (September) to assist with the annual harvest.

Summer Camp staff are also required over the warmer months at Camp Montana.

You will need a valid working visa to work at Crans Montana. Switzerland has reasonably tough visa laws, so it is important to check these before applying. See Work a Snow Season in Switzerland for information on work rights in Switzerland and how to get a working visa.

People from the European Union are granted access to the Swiss labour market and are able to apply for jobs at Crans Montana without an additional visa.

Crans Montana will sponsor applicants for a working visa in accordance with Swiss law – i.e. in limited numbers and only if you are ‘well-qualified’, which translates as a specialist role such as a snow groomer, ski instructor or other non-entry level job.

Crans Montana and its associated businesses will also hire people under the Swiss Trainee Agreements with residents of Argentina, Australia, Bulgaria, Canada, Japan, Monaco, New Zealand, Philippines, Romania, Russia, South Africa, Ukraine and the USA. Young professionals are required to work (or undertake their ‘traineeship’) in the occupation that they have learned or in their study major.

How is the Terrain at Crans-Montana?

Crans-Montana is home to a 140km network of mostly intermediate runs, including 17 blue (55km), 20 red (70 km) and 4 black (15 km) runs. The longest run on the mountain is a 12km trail from Plaine Morte into the wooded valley of Les Barzettes. Lifts take you up from four valley bases.

While a good resort for beginner-intermediates, some of the more advanced riders out there might find themselves a little bored after a week on the slopes here (having probably spent the majority of their time around the Violettes area, and perhaps a run or two on the men’s downhill course, Piste Nationale), and many look to the region’s other resorts for some extra exploring and more challenging riding. The best moguls section is a short pitch at La Toula.

Luckily, if you purchase a season pass for the Crans-Montana-Aminona ski resort (or given one by your employer), discounts are available at other ski resorts in the area (e.g. 4-Vallées).

If you are a cross-country fanatic, you will be pleased to discover 30km of cross-country trails around the resort. Guides are available to take skiers and boarders off-piste, while the majority of Crans’ tree runs can be found around the lower half of the resort’s 1500m vertical drop.

The resort’s 34 lifts include a funitel, gondolas/cable cars, chair lifts, button lifts and magic carpets for beginners. There are not many pomas or t-bars, luckily for snowboarders.

Night skiing is available on select runs, and flare runs are organised intermittently.

On account of Crans-Montana’s south-facing slopes and almost year-round sunny weather – at an average of 300 days of sun per year – there’s plenty of bluebird riding to be had, though snow cover can thin out over the season. Particularly at the lower regions of the mountain, the snow cover can get patchy and you may even experience spring like conditions in January some seasons.

Approximately a third of the terrain is covered by snow guns, topping up the cover on the resort’s most popular runs.

The terrain park is laid out over an impressive 100,000 square-metre area, home to straight and C-rails, boxes, jumps and various features that vary from season to season. The ‘Adrenaline Zone’ offers a halfpipe, a gentle snowpark for freestyle beginners, and a skier cross/boardercross course. There are 3 lines to hit and several rails – one of the bigger parks in Switzerland.

Staff accommodation is usually not offered with jobs at Crans-Montana, meaning employees have to make their own arrangements for the season, which can be tricky.

As with all busy ski towns, it’s strongly advised that you secure your accommodation for the season sooner, rather than later.

Alternatively, if you’re looking to source accommodation upon your arrival at Crans-Montana, visit one of the village’s real estate agencies, or drop into the COOP or Migros grocery stores in town, which both house local noticeboards. Real estate agents in town include: