Work A Ski Season in LAAX

Discover information on working a ski season in LAAX or Flims and browse winter jobs.

Once unheard of outside Switzerland, LAAX is finally asserting itself on the European seasonal worker’s radar and is becoming a more popular place for foreigners at which to work a winter season. LAAX is part of the Weisse Arena Gruppe and combines the three formerly separate areas of Laax, Flims and Falera – the resultant name is LAAX. LAAX is known for its terrain parks, massive half-pipe, indoor freestyle facilities and general freestyle vibe. 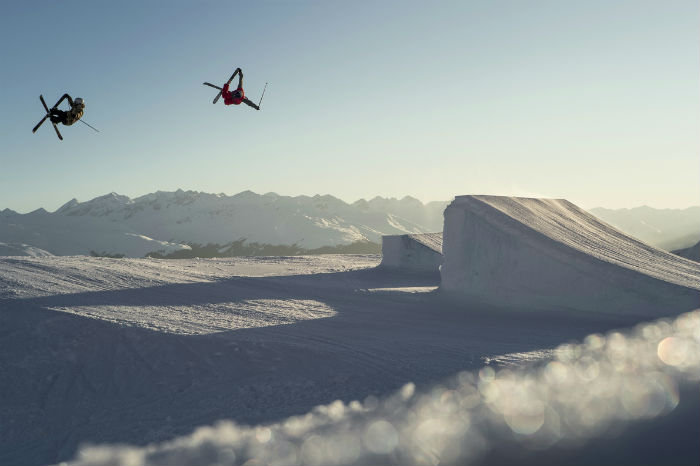 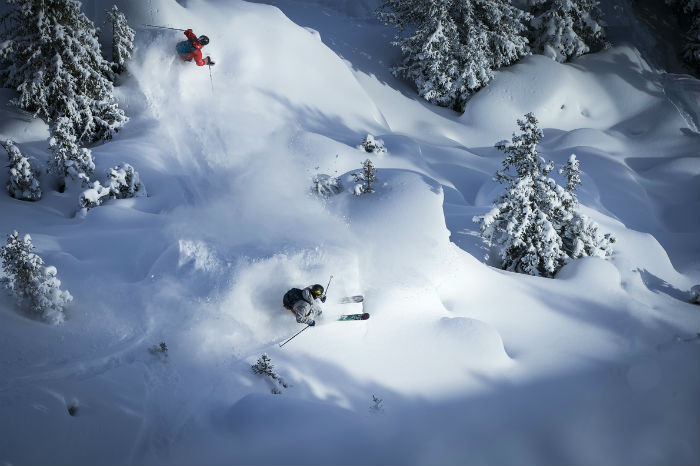 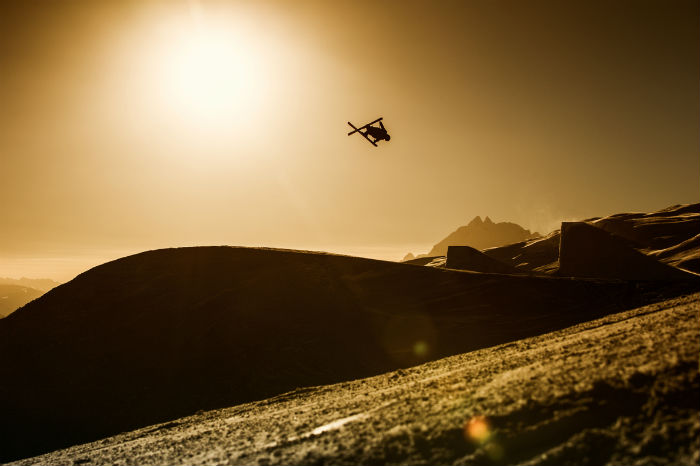 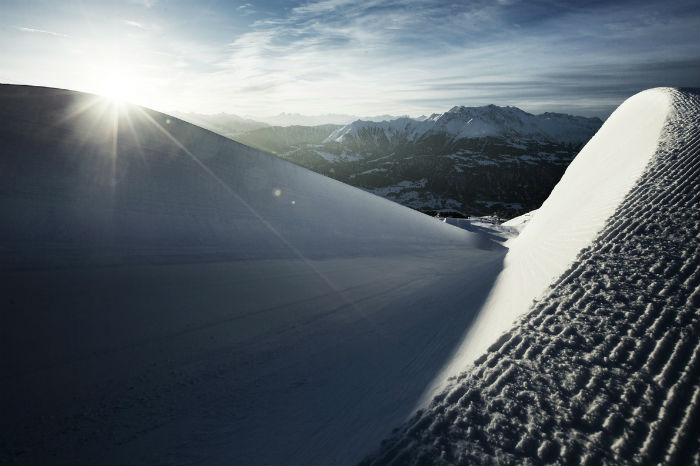 Getting There and Around

LAAX is located in southeast Switzerland, near the Italian and Austrian borders. It is around 140 km south of Zurich, taking about an hour and a half by car, and 250 km east of Bern, or about 3 hours by car.

Getting to LAAX is fairly straightforward thanks to Switzerland’s well-developed motorway and public transport network. If you decide to drive, take the A3/A13 motorway to Chur and then continue on exit #18. From there it is a 20-minute drive along the main road. If you are coming from San Bernardino Pass in the south, take the “Reichenau” exit (exit #18).

By Train or Bus

Switzerland has an excellent rail system that you will get you to Chur from anywhere in Switzerland. See www.sbb.ch to buy tickets.

From Chur, the Postauto bus service will bring you directly to the base station of Flims Laax and Falera. The bus takes around 40 minutes, costs 10CHF and run until 7pm on most days.

LAAX itself consists of three smaller towns – Flims, Laax and Falera – which are all around 10km apart. You can easily travel between them either by car or on public transport, using the free shuttle service and nightbus provided by LAAX. It runs until 2am on weekdays and 4am on weekends and costs 5CHF.

Of the three towns – Flims, Laax and Falera – Flims is the largest, with about 3000 regular inhabitants (although it can reach up to 10,000 during peak season).

One of the best features of LAAX nightlife is the nightbus service, which travels between the towns and makes it easy to visit different bars and clubs throughout the night, as well as get back to your place after a night out. Nightlife is not cheap in Laax, however, and you may end up spending a number of nights in with your co-workers to save money.

The liveliest of the three towns, Flims has plenty of restaurants and bars open until the late hours during the winter months, and is usually the best bet if you’re looking to go out.

The Living Room remains the gold standard for bars at Flims. Tucked away on a small road off the main street, it boasts a big open fireplace, chilled music and free wireless internet if you buy a drink, making it a great spot to hang out after a hard day on the slopes. Legna Bar is another good bar at Flims for a relaxed vibe.

If you want to go clubbing, the Arena Club is a good place to be. Located at the Flims base station, this basement nightclub hosts regular parties with local DJs and stays open til early in the morning. It also hosts staff parties for seasonal workers.

Situated just below is the Arena Bar, which is a popular meeting point for workers at Laax.

The town of Laax is slightly smaller, with only around 1500 residents. It is generally fairly quiet, but the base station is the place to be after a big day as it offers a number of good places for après-ski drinks. The iconic Crap Bar has the best atmosphere but there are also some good newer bars around Rocks Resort like Il Pup and Indy Bar.

Riders Palace is a hotel mostly for young people as well as one of the biggest clubs at the mountain. It sometimes draws in large international acts, although tickets often sell out so if you plan on going you should buy in advance. Even if there are no big names playing, Riders Palace still gets fairly busy and the bar stays open to around 4 am. It also plays snowboarding films on big screens throughout the club.

The Lobby Bar is another popular club thanks to its legendary DJ parties and small but good live acts.

Falera is the smallest of the three towns. It is a very charming and tiny village – only around 500 people live there – and is best if you like to escape the larger crowds of Flims and Laax.

Getting a Job and Working at LAAX

Rare for Switzerland and Europe in general, LAAX is operated by one company – the Weisse Arena Gruppe. Usually, at Swiss Ski Resorts, operations are fragmented such that one company would operate the lifts, and others the shops and restaurants etc. and you would need to apply separately. At LAAX, you are therefore able to easily apply for a range of jobs through the centralised process.

Jobs include service, chefs, housekeeping, reception; working for lift operations (cashier, operating the railway, preparation of slopes); in the snowpark (shaper); or in the snowboard or ski school or in the administration department (HR, sales, marketing, finances, reservation). However, there are not many British tour operator jobs at LAAX as it is still not seen as a destination resort for Brits.

LAAX workers tend to come from all over Europe including Switzerland, Germany, Portugal, Spain, UK, Netherlands, Hungary and Belgium, as well as Asia.

To make an application and view job listings at LAAX, head to www.weissearena.com/en/jobs/. It is best to apply during the summer. The season opens on 29 November and closes 12 April.

You can expect to earn around 3,500 Swiss Francs per month for the lowest paid jobs at the mountain.

International applicants are accepted but whether face-to-face interviews are required depends on the job. You will need a valid working visa to work in Switzerland. See Jobs At Swiss Ski Resorts for further information.

Season workers also get the ‘The TopCard’ which is the joint season pass for Flims Laax Falera, Davos Klosters and Silvretta Arena Ischgl/Samnaun. These other resorts are good to ski on your days off work. Combined, there are now 773 km of slopes and 131 ski lifts for seasonal workers in the area to get into.

The Terrain at LAAX

Because of the two sick freestyle events held at the mountain, its terrain park and indoor freestyle facility, Laax really is a snowboarder’s destination, attracting almost more snowboarders than skiers. This gives the resort a bit more of a freestyle vibe, particularly with the great terrain parks they set up each year which are among the biggest and best in Europe. Many seasonal workers come to LAAX simply for its snowparks.

For the most part, the other terrain at LAAX is best suited to intermediates with its long, gradual pitches and lengthy runs along the gondolas from both Flims and Laax. Much of the terrain is really open and treeless and contained within larger bowls, and the best skiing can be found around Nagens, at an altitude of 2127m. The Curnius lift area is a great little area for small bumps and mini drop-offs. The glacier riding is limited at Vorab Glacier, but it does access a nice long black run to Lavadinas.

Lower down there are some nice gladed runs. The Nagens Gondola also has some good gladed access if you go along the black 18 run and hop off the side. Flims has the best beginner areas for first time seasonal workers.

LAAX is a large resort, being twice the size of Saas-fe, one of the more well-known resorts in Switzerland. There are 235 km of ski pistes, the majority of which are above 2000m. With the reciprocal season pass at Davos Klosters and Silvretta Arena Ischgl/Samnaun, you can head over and tackle different terrain on your days off. It will take a lot more than a season to explore everything on offer if you are working a season.

Thanks to its size, the trails at LAAX are generally quiet and secluded, although the lift lines are not as quiet as they used to be.

Fitting right in with its freeride vibe, LAAX also has 40 trails which are not groomed or prepared, but are sign posted and secured freeride routes.

These are similar to runs in North America which are off-piste but still within the control of the resort. They offer fantastic powder riding through beautiful scenery, particularly after large dumps of snow.

These runs are, for the most part, pretty challenging, combining constantly changing gradients and widths as well as obstacles such as trees and boulders, but are some of the most spectacular trails at the resort. You will certainly want to hit these up over a season as you become a more advanced rider.

These runs can get tracked out after a dump, so a good option is to hike a bit further to find freshies. From the top of the Vorab Glacier, head right to the Sattel for some good runs around Run 35. There are some good freeride routes from the top of Vorab Pign, as well as from the restaurant on the top of the Crap Masegn if you hike a little.

For intermediates, there is a bit of open free riding down from La Siala summit which is a great long run to hit after a dump.

Be careful whenever you are going outside secured avalanche zones and be wary of cliffs in the area.

LAAX is mostly south-facing meaning that it can get hit by a lot of sun. This means a lot of bluebird, sunny days but it can also mean less than ideal snow. While the upper runs tend to hold their snow well, the lower runs are not as snow-sure and some runs such as those near Cassons tend to close when there hasn’t been snow for a while.

LAAX is famous for its terrain parks and has put serious effort into making these among the biggest and best in Switzerland.

Surrounding the Crap Sogn Gion station at a height of 2228m are four snowparks with enough kickers, rails and boxes to keep even the most dedicated of riders satisfied. However, the one major problem with the snowparks is that the lift to get back up is shared with newbies which can frustrate the more experienced riders who like to make quick loops of the park.

There are also two halfpipes – one 100m beginner’s pipe, and one 140m superpipe. The snowpark area is the biggest in Europe while the 140m superpipe is the world’s largest, and is permanently in place each season.

LAAX is also home to a freestyle academy Europe’s first indoor freestyle training centre. It has trampolines, skateboarding infrastructure, boulder area and slackline. For park riders, the best features are the kickers of varying size which have a foam pit on the other side to practice safe landings and new tricks.

Finding Accommodation for the Winter Season

Good places to look include

Be sure to keep an eye out for advertisements and noticeboards at local shops as well.

The resort also holds a number of staff parties and events throughout the season. The biggest is the resort-wide “Welcome Day” event for all employees that is held at the beginning of the season. It involves an aperitif as well as some entertainment and speeches.

During the season a number of events like races and dinners are also held, the biggest of which is the Pleasure Spring Session, which creates a fun atmosphere at the resort.

LAAX hosts a number of skiing and snowboarding events throughout the season. These include the Burton European Open Championships, the European Freeski Open, and the NK Snowfest. These events are some of the best parts of working at LAAX, as you’re able to witness some of the biggest stars in skiing and snowboarding first hand. The event is always accompanied by lots of side program and parties