Discover information on working a ski season at Bear Mountain and browse jobs.

USA
Other US Resorts

Over 50% of the staff return every season to work at Bear Mountain or Snow Summit to give an indication of how staff enjoy working there. Typically, the resorts open toward the last week of November and close around the middle of April, depending upon the weather.

To get to Big Bear Lake, from Los Angeles/San Bernardino take: State Hwy 330 / Hwy 18 through Running Springs; then Highway 38 through Redlands; then Highway 18 through Lucerne Valley. It is around a two and a half hour drive from downtown LA to Big Bear. Once you’re there, an hourly shuttle that runs between the two mountains. 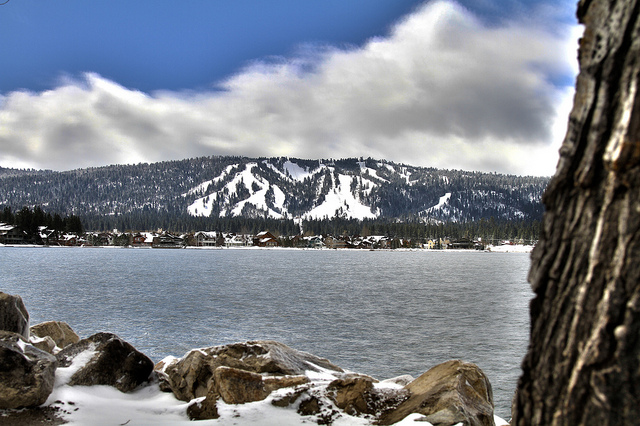 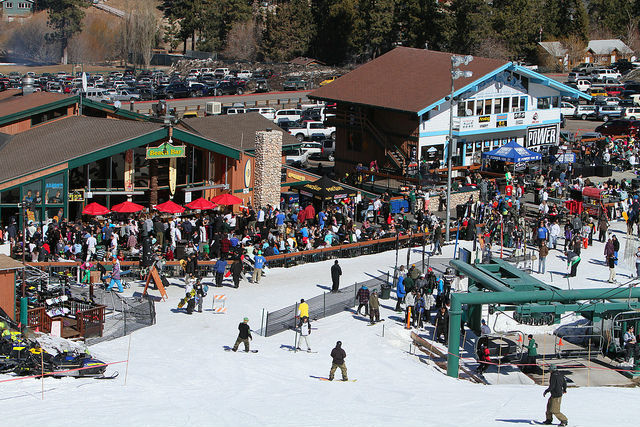 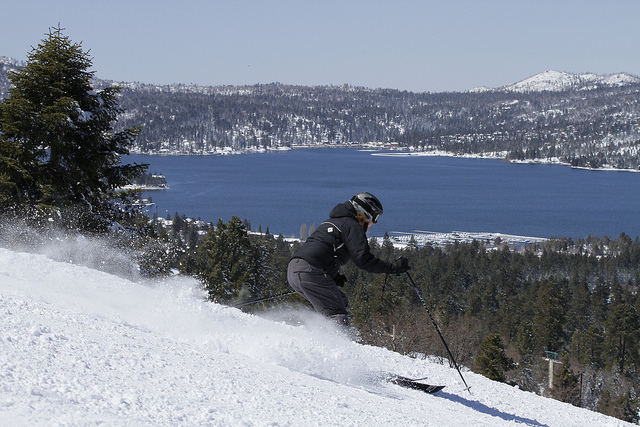 The center of the town of Big Bear Lake is often referred to as ‘The Village’. It is a small mountain town but has a resort vibe as well as it caters to both winter and summer activities and events.

There are a number of shopping and entertainment options and a range of fine quality restaurants. The town is a second home to many visitors from Los Angeles and San Diego, with single family homes/cabins scattered throughout the Big Bear Valley. The majority of the staff come from the cities of Southern California. Snow Summit was often ridden by Shaun White when he was young.

Bear Mountain has a ton of natural features all over the mountain such that the whole mountain is a bit of a terrain park and is why the resort is more popular with snowboarders than Snow Summit.

There are three peaks at Bear Mountain: Bear Peak, Silver Mountain, and Goldmine Mountain. Bear Peak, at 8,805 ft (2,684 m), is Southern California’s highest lift-served peak and has some of the steepest and most challenging lift-served terrain in Southern California, known as Geronimo. The total acreage of the mountain is not as large as is found in the High Sierras or Rockies but they use the space well.

During seasons where there is a lot of natural snow, there is some back country for skiing. Off Silver Mountain there is access to Deer, Goldmine and Bow Canyons which have the best skiing and inbound resort riding between the two resorts.

Conversely, the runs at Snow Summit are more wide open than at Bear Mountain and there are more areas that lend themselves to more skiing than snowboarding at Snow Summit.

Bear Mountain has night skiing on the weekends.

Average annual snowfall is about 100 inches. Bear Mountain does a ton of snowmaking, using the water in nearby Big Bear Lake. Snowmaking covers all runs and can blanket Snow Summit and Bear Mountain from top to bottom, so in years when snow is sparse in California, Big Bear can often have better skiing and snowboarding than other areas. Most common is packed powder and there are occasional powder days in the peak season.

Bear Mountain is a popular mountain and can get reasonably heavy crowds, especially around the terrain parks which are among the best in the area.

Snow Summit’s terrain parks are located on the Westridge run, ZZYZX, and Ego Trip, while the Family Park sits quietly to the west catering to beginner park riders and kids. These offer a variety of beginner to intermediate jumps and jibs.

Getting a Job at Bear Mountain or Snow Summit

The best way to get a job is to attend one the job fairs. These are usually held in early October at Bear Mountain, followed by a second fair in mid-October at Snow Summit. You can apply for either site at each of the job fairs. If you cannot attend, then you can fill out an application online, print and sign it and mail it in to the PO Box listed on the application.

You may submit an application any time after September 1 for the upcoming winter season.

If you are not able to attend one of the job fairs, you may submit an application at any time throughout the season as jobs do occasionally become available during the season as employees leave. Staffing is sometimes fully reached by the job fairs.

The hourly wage varies according to the department where you are employed and the skills required. Most entry level positions start at $9.00/hour. Experience and advanced abilities may start at a higher rate.

Instructors are able to apply without having their instructing certificate and the resort will train applicants to their level 1.

Big Bear has stopped sponsoring foreign applicants on H2B visas in an effort to hire more locally as the US has had such high unemployment in the current economy.

However, if an applicant is able to arrange their own J-1 visa, they may apply and be considered for employment. See Work a Snow Season in the USA for further information on getting a J-1 visa to the US. Face-to-face interviews are required so you will already need to be in the US

Free skiing and snowboarding for employees and their legal dependents including grandchildren at both mountains. Discounted lessons, food, equipment rentals. Company parties/mixers, “wooden nickel” and “employee of the month” reward programs.

Any winter related business catering to large volumes of visitors has staffing needs. These would include restaurants, lodging and retail sales as well as equipment rentals for the resorts. The City of Big Bear Lake may have employment offerings.

Staff accommodation is not offered. Rooms in the area might go for as low $250, but to get a full house you might spend $1,000. Most staff live in the resort area. Big Bear Grizzly is the local newspaper which may have rental listings. There are local boards around town too, including one in the employee services office.

Events During the Season

The big events of the season are usually Hot Dawgz & Hand Rails in September, which kicks off the season with a huge party and snowboarding competition. New Year’s Eve is a big celebration that includes a torchlight parade from the mountain top, and parties with entertainment at the base of the mountain. And then there’s nothing like spring skiing in 50+ weather with sunshine all day long.

Most of the nightlife is in “The Village”. There are several bars from urban type bars to an old fashioned Karaoke bar. Popular bars include AV Club, Murray’s, Chad’s, Whiskey Dave’s & The Bombay Club. A few of the restaurants also offer bars like Sandy’s & B’s Backyard BBQ.

There are live music options from time-to-time including bands passing through at “The Cave” or more theatrical performances at the “The PAC” put on by local and professional talent.

In town, there’s bowling, a movie theater, and hey, get onto the night skiing on weekends if nothing else. Certain departments may have occasional parties and there’s always an employee appreciation family night each season where the management serves the rest of the employees.