Les Menuires and Saint Martin de Belleville are located in the French Alps, in the Savoy. The resorts are around two hours from Geneva in Switzerland and a little less than an hour’s drive from the French town of Chambery. Les Menuires and Saint Martin are two of the towns of the Three Valleys Ski Area, which is made up of eight different resorts and is the largest interlinked ski area in Europe.

Les Menuires is a lower key option for working in The Three Valleys as it is not as well-known as some of its neighbours and has a smaller nightlife which can nonetheless still be vibrant. Les Menuires is a family-focused resort but does have a number of steeper on-piste runs, in addition to easy access to other Three Valleys resorts.en.lesmenuires.com/winter 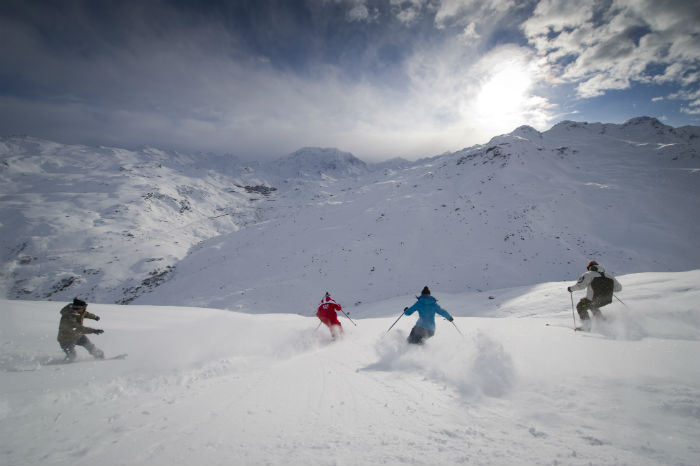 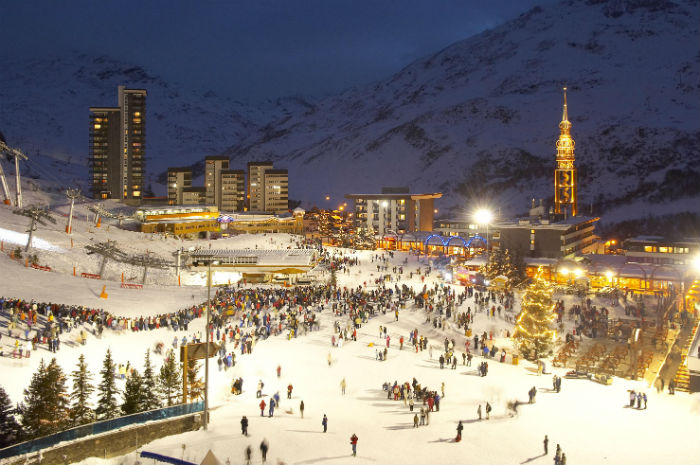 Getting to Les Menuires and Saint Martin de Belleville

Les Menuires and Saint Martin work together as a single resort even though they are two separate towns. Of the two towns, Les Menuires is much bigger and has much more of the nightlife. Saint Martin (1,450m) is lower in altitude than Les Menuires (1,850m), which is again lower than Val Thorens (2,300m).

Les Menuires was constructed in the mid-sixties and consists of nine distinct quarters linked by pistes as well as pedestrian paths or ski lifts. Each quarter was built at a different period and demonstrates the architectural development of the mountain.

La Croisette, Brelin and Preyerand were built with functionality in mind. Les Bruyères and Reberty have buildings limited to six stories in height with sloping roofs and wooden façades, giving these areas a mountain feel.

La Sapinière, Reberty 2 000, Les Balcons des Bruyères, Les Hameaux des Marmottes and Les Airelles are inspired by Savoyard buildings and integrate stone into the construction of their buildings. These latter are home to many of the modern chalets. There are around 26,000 spots for tourists to stay in Les Menuires.

Saint Martin is located at the entrance to La Vallée des Belleville. It is the more classically postcard village of the two towns but is much smaller than Les Menuires. In the early 1980s, the town council decided to limit buildings to four stories which was around the time that Saint Martin was linked to the rest of Les 3 Vallées ski area.

The village is now full of quiet chalets and it is this type of clientele that the village seeks to attract. There are around 2,600 spots for tourists in Saint Martin.

Usual nationalities found in the two towns include French, British, Dutch, Belgian, German and Russian. There are a lot of seasonal workers in the villages as 70% of beds are professionally rented. Clientele breakdown in Les Menuires is 47% foreign / 53% French and in Saint Martin it is 75% foreign / 25% French.

Les Menuires has a lot of beginner and intermediate terrain which attracts families and is good for those who like cruising. Most of the terrain is above the tree-line which means a lot of open space, although most riders tend to stay on-piste. There isn’t much in the way of steeps, however, and experts will usually head off to other resorts. There are a few good mogul patches that open up each season.

Les Menuires is catching onto the back country wave that is popular in other ski resorts around the world. There are “Nature Zones” created within the ski area which are purposefully set aside as non-groomed off-piste which will nonetheless be safe.

Les Menuires has one of the best positions in the Three Valleys with direct links to Val Thorens (up in the same valley) and Meribel. Most seasonal workers will spend a good portion of their days off at other resorts in The Three Valleys, mostly the closest resorts of Meribel and Val Thorens. An eight-seater gondola takes riders from Saint Martin directly to Meribel.

The Three Valleys is an enormous ski area designed as much for seasoned skiers as it is for beginners and children. There is truly an exceptional amount of terrain to discover at Les 3 Vallées given that it combines so many resorts, and you can be discovering new terrain for the entire season.

From the glaciers of Val Thorens to the apple trees of Brides-les-Bains, taking in the pine forests of La Tania along the way, Les 3 Vallées has a diverse array of terrain backed by incredible scenery.

Les Menuires is not famed for its snow, and usually receives around 5 metres each season. The lower slopes in particular can get slushy due to their sun exposure. The snow-making machines receive a strong work-out each season to make up for patchiness.

There is one park – the BK Park. This also has a video system in partnership with the French Ski Federation in zone 1 of the park. This will film you as you take your line through the park.

At the top of the Roc des 3 Marches gondola, Les Menuires has installed the DVA (Detector of Avalanche Victims) Park. In this area, you can practice looking for avalanche victims in preparation of trips into the back country. This helps to teach you the vital avalanche skills such as how to use a beacon, shovel and probe

The Espace Saisonnier (Seasonal workers space) in Les Menuires / Saint Martin de Belleville is probably the best and easiest way to find a job at the resort. It is run by the local municipality and has a physical office which posts a list of jobs that employers in the area have advertised. You can consult the list of jobs at their site https://emploi.lesbelleville.fr/ (French only).

They will be willing to provide information on current jobs available, a list of jobs posted by employers, links to employers and job guidance.

The SMB ‘Espace Saisonnier’ services the resorts of St Martin de Belleville, Les Menuires and Val Thorens which means it services the entire western valley of The Three Valleys.

The lift company at Les Menuires Saint Martin de Belleville is called SEVABEL. These will be for jobs related lift and mountain operations. They can be contacted at the Espace Saisonniers or at [email protected].

Pole-Emploi.fr is a French Government website which has jobs for the entire country and can be a worthwhile resource when looking for a job. Select the village of Saint-Martin-de-Belleville.

Emplois-espaces.fr is another job resource which is specialized in tourism in France and may be a way to find a job in the valley.

Jobs la Montage sometimes has job listings for the area.

A number of tour companies operate in the Les 3 Vallées. These companies run full package holidays for visitors. These packages can include things such as buses to and from the airport, accommodation in tour run chalets and hotels, help with getting around town and getting ski passes etc. Many of the British companies will only hire UK nationals. Better jobs that are offered by tour operators include:

Tour operators in The Three Valleys area include:

If you want to ski instruct in France, you will need to get your French ski instruction qualifications. See Work a Snow Season in France for information on transferring your foreign certificate.

Les Menuires does not offer training for those who haven’t got their instruction certificate, so it will be necessary to obtain your certificate before applying for a job.

If you are from outside the EU, you will need to get a French working visa. See Work a Snow Season in France for information on getting a visa. If you have your work permit you may turn up in town to look for a job.

If you work at SEVABEL which is the company that runs the lifts and other operations at Les Menuires, then you able to have free access to all the ski areas of the Compagnie des Alpes. These areas includes:

Employees just need to show their work contract. For employees who are not working for SEVABEL, there are no reciprocal deals with other resorts.

With 90% of jobs at Les Menuires / Saint Martin de Belleville, employers will have staff housing available for employees. The rent will be taken out of pay. Employers usually book a number of apartments in advance of the season for their workers, so their housing can change from year to year.

Employees are able to refuse the staff housing if they wish to find their own place; however, finding your own place can be quite difficult and most employees end up accepting staff housing.

The council has built a place called ‘Agibel’ which is the most well-known place for seasonal workers. It is usually booked out a year in advance by employers.

It is not staff housing per se, as it can be used by anyone, but it is a well-known, fun apartment block used by employers. Each employee will have their own apartment in this block.

Often, landlords will rent out places for the season and charge a fixed price. You could find a studio apartment starting at around 5000 euros for the season.

The Espace Saisonniers has a list of available places to rent as well as a list of people looking for flatmates for the season https://emploi.lesbelleville.fr/logement/

There are a few tourist offices in Les Menuires which can be contacted:

There are a huge number of festivals, events, music sets, food celebrations, parties and concerts in the Three Valleys. Some of the major events in Les Menuires include:

Les Menuires is also home to “Speed Mountain”, the longest toboggan rail run in the French Alps. It is a toboggan run on rails landscaped from beginning to end and is well worth doing at least once during the season. Riders take on ‘Boukty’, Les Menuires’s mascot over a 1200m long run. Riders can go up to 70km on the run and measures their speed against three check points along the route. It is 7€ per ride – or 30€ for 5 descents.