Discover information on ski holidays and working a season in Tochal, Iran

Tochal is a small ski area just north of Tehran. It is the smallest of the four Iranian ski areas in the Alborz Mountain Range. The two telecabins that take you up to the resort offer a fantastic view of Tehran and the mountains and it is worth coming up here for a day-trip even if you don’t ski or snowboard.

See the Guide to Skiing and Snowboarding in Iran for full details on visas and travel in Iran. 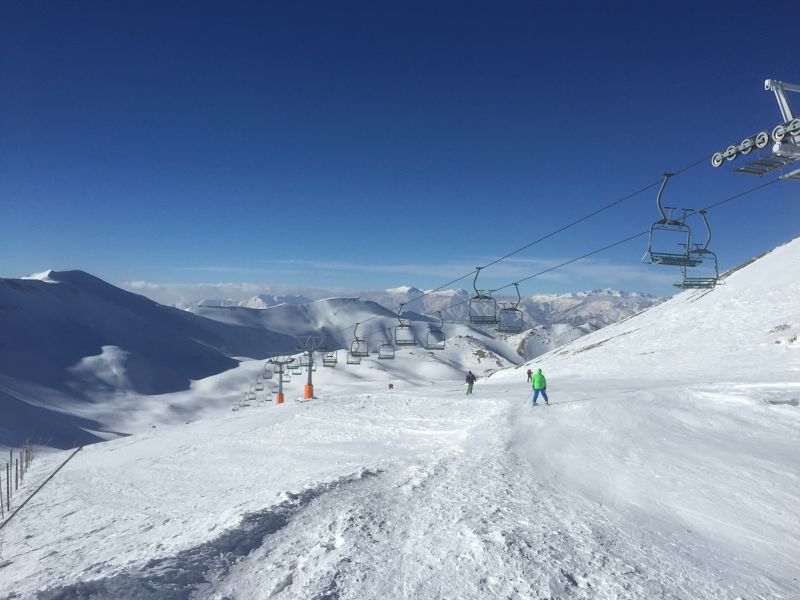 Tochal is great for a day-trip from Tehran as it is so close to the city. In fact, the telecabin that takes you up is right on the edge of the city. There is another chairlift nearby at Darband. This is not a ski area, but rather just a place for Tehranis to hike and picnic.

The best way for tourists to get to Tochal is to take a taxi from Tehran. From the northern end of Tehran, this shouldn’t cost much more than 300,000 Rials (around USD 9).

Once you get to Tochal, you will see a carpark and a small rental shop where you can hire gear. There are two telecabins to take you up which are magnificently long. The first telecabin takes around 30 minutes and then you switch to a second telecabin which takes another 15 minutes, before arriving at the ski area. Don’t be alarmed if there is no snow at the base of the telecabin – there assuredly will be at the top.

Remember to bring your ID to Tochal! Tochal mountain operations likes to take down details of each visitor in case something happens to you up on the mountain and they will insist on taking your name at the gate.

The Terrain at Tochal

Tochal is really small ski area with just two lifts servicing beginner terrain. The resort is in a small valley with the pistes running down the center. It is a very nice little area to work on your beginner technique, but more advanced riders will want to get to the other resorts of Shemshak, Darbandsar and Dizin at some point.

There is a small amount of in-bound hiking terrain available for a slightly steeper but shorter pitch.

Tochal also has a small terrain park with a number of smaller rails, boxes and jumps.

There is a great view at the top of Tochal and you often find yourself above the clouds. Also, coming back down the telecabin at the end of the day offers a beautiful view over the city of Tehran.

The lifts close each day at 3pm or whenever the lift crew decides its time to close due to wind or other bad conditions. There is no way down again except the telecabin so they are keen to ensure everyone gets off the mountain.

Because it is so close to Tehran, Tochal is a very popular ski area. It is best to avoid the weekends if possible. The Iranian weekend is Thursday and Friday. The line to take the telecabin down at the end of the day can be hugely long and might even take over an hour in line.

A lift ticket for the day costs 500,000 Rials (USD 15). You can hire pretty good gear at the base, including pants, gloves and jackets for around 1 milllion Rials (USD 30).

There is a small cabin at the bottom of the two chairlifts at Tochal where you can get some pretty delicious lunch and hot drinks. This is quite cheap.

The small cabin at the bottom of the two chairlifts has a hotel in it. But really, you are much better off staying in Tehran where there are restaurants and nightlife and the other attractions of Tehran.

You can find relatively cheap hostels and hotels in Tehran, at hostels for as little as USD 15 a night.

Tochal is a very small ski hill and as such there aren’t many jobs on offer. These mostly go to locals. In any case, you would probably need to know the manager, as well as speak Farsi and hold an Iranian passport.