Val d’Isère and Tignes are two separate resorts interconnected by chairlifts. Together, they are known as the Espace Killy and are considered among France’s top-end ski resorts, attracting a lot of foreign tourists every season. The season opens in late November and closes in early May. 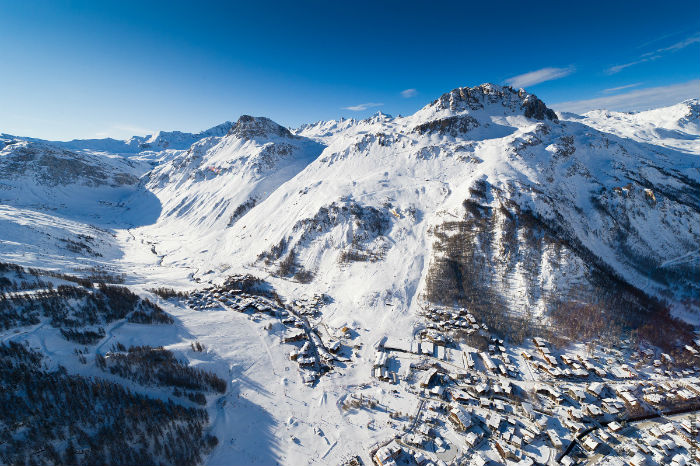 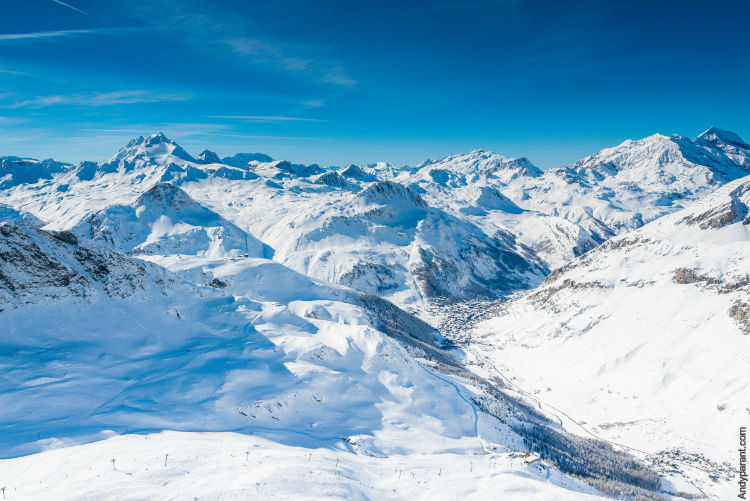 Val d’Isère is located right next to the Italian border in south-eastern France.

If you are arriving by train, the closest station is at Bourg St Maurice, around 30km away, which serves as the arrival point for a number of high-speed trains including the TGV, the Eurostar and the Thalys.

From Bourg St Maurice, there are regular public buses to Val which take about an hour. A local taxi is also possible and will cost around 80 euros.

From the airports, you could also take a transfer directly through a shuttle company which will cost a little extra.

If driving to Val, take Autoroute A43 to Albertville then the N90 to Moutiers. Once at Moutiers, head in the direction of Bourg St Maurice D902 until you get to Val d’Isère. Val d’Isère is around an hour’s drive from Les Trois Vallées ski resorts which make for a good few day trips during the season. Sainte Foy is also nearby for a day trip.

There is not much public transport in town which means walking most places. Also, it is not really possible to hire a car so you are reliant on buses to get you back down to the major towns.

Both Val d’Isère and Tignes are high-end resorts that draw in tourists as much for the scenery and villages as they do for the skiing.

You will find mountain restaurants with incredible views (La Folie Douce is particularly famous), wellness centers, designer clothes shops and even a casino. The architecture is lovely, with some cool stone buildings and farmhouse style chalets. A backwater, this is not. Of course, these amenities and style don’t come cheap so as a seasonal worker you should expect to spend most of your pay packet on living costs.

Val d’Isère village is built in a very pretty valley. The ski area is built on one side while the other side of the valley is untouched due to the heavily rocky terrain. Val d’Isère is generally considered to have better scenery than Tignes including some spectacular views as you head back home for the day.

Central Val d’Isère is quite compact and it is possible to walk from one side to the other in 10 – 15 minutes. There are a few other communes in the area which make up Val, including La Daille at one end and Le Fornet at the other end which is further away. Le Chatelard is another commune up the mountain around 15 minutes’ walk.

There is a free local bus that runs between La Daille and Le Fornet. The bus comes every 5 minutes during the day and every 15 minutes from 5.30pm to 10pm with reduced frequency after that until 2.45am. This bus is very handy for getting home after a night out. There are two other lines between Les Rond Point and Lesgettaz, and Clochetons and Les Rond Points which run every 15 minutes.

In contrast to Val, Tignes has more behemoth 1970s hotels and lacks the same charm as Val d’Isère. Val also probably has the better party scene among seasonal workers.

You will find a fairly British atmosphere at Val given the large number of British seasonal workers and holiday-makers. You will also find a large number of Scandinavians at Val.

The Terrain at Val d’Isère

Beginners should note that, while there is a bunny area, the jump up is quite steep once you get onto the lifts. Intermediates have a lot to like about Val d’Isère with plenty of nice cruisers on-piste. However, for experts, Val d’Isère alone is a little limited for a whole season. You should definitely get a season pass for Tignes in addition to Val as Tignes has more challenging terrain.

Le Fornet is the highest of the three areas at Val and includes the glacier at the top. This glacier has some nice red and blues and has the best snow conditions due to its height. Fornet has lots of long wide-open groomers for intermediates as well as some nice off-piste riding, probably the best in Espace Killy, if you are willing to hike a little.

Solaise is the busiest area of the mountain and has the best terrain for beginners. It can get a little crowded, especially on weekends and especially on the home trails in the afternoon.

Bellevarde is located in a bowl. The steepest on-piste runs are found here although there are some nice gentle groomers too towards La Daille (which can get icy when it hasn’t snowed). The view of Mont Blanc is beautiful at Bellevarde.

Snowboarders watch out – Val d’Isère has quite a lot of flatter areas which means a bit of walking.

If you are going off-piste, take the appropriate avalanche precautions. Henry’s Avalanche Talk in the Morris Pub is a good place to start avalanche learning.

Tignes has even more to offer for off-piste riding than Val.

ValPark is found at the top of Bellevarde. There is a good selection of 25 features right up to pro level and there are pro events each year where you can watch the guns throw down.

There are also three boardercross courses as well as a mogul’s course.

The snow conditions at Val/Tignes are generally among the best in France. Of course, the snow in France is not as good as the snow in Japan or the Rockies in North America and a good season might see five meters of snow.

The riding is better in Tignes than Val due to its higher elevation. Val d’Isère can get a little mushy on warmer days and most of the nice runs in Val are lower and through the trees.

Both Tignes and Val d’Isère have glaciers allowing riding even in summer.

It gets quite busy in Val d’Isère particularly during the school holidays periods for Britain and France. April is the best month as the snow is usually still good but the crowds have thinned.

To find a job at Val, there are several resources:

If you have a trade such as a cook, you are more likely to find work throughout the season seeing as many people get fired or leave during the season.

Association Vie Valdis also has a list of local businesses under its Guide Pratique – if you go to the Vie Valdis jobs section.

For instructors, you are able to find the names of the various snowsports schools at www.valdisere.com/ski/ecoles-de-ski/.

Tour companies are another good way to find work, particularly if you don’t speak French (French speakers will of course have an easier time finding a job with a tour company).

These companies offer full-service packages to tourists and include jobs such as airport transfer, ski guides and chalet hosts.

Many tour companies British run and some only accept British citizens.

You will mostly work 6 days a week with some time off each day either in the morning or evening. You could expect to earn around 80 pounds a week with accommodation, season pass and food included, although company reps could make a little extra through tips and commission. A tip – it’s a good idea to cut deals with restaurants early in the season as well as the instructors from whom you might get commission and free lessons.

The transfer time to Geneva airport is around three hours’ drive.

Tour companies that operate in Val d’Isère include:

It is highly recommended to find a job that comes with staff housing as the rents in Val d’Isère are prohibitively expensive and extremely difficult to find.

In Val, around 70% of employers provide housing for their employees as part of the salary package. Most staff accommodation will be very basic, often nothing more than a mattress in a room. However, they are usually close to the center of the village.

If you are forced to find a place yourself, make sure you secure a place early (in October). Any rental listings in Val can usually be found at Association Vie Valdis if you contact them.

If you are paying rent, you should expect to pay around 6000 € for the season for a room of around 25m2.

If you are not in central Val d’Isère, there are a number of surrounding areas which are a little quieter. Chatelard is around 15-20 minutes’ from the centre of town and is mostly condominiums.

La Daille is another little area at the base of the La Daille gondola and is around 30 minutes’ walk. There is a supermarket and a few quieter restaurants and bars at La Daille.

Le Fornet is at the base of the Fornet lift. This is around 45 minutes’ walk from central Val and is probably pushing the limit of how far you would want to walk after a night out in central Val. As there are only a few quieter restaurants here as well, Le Fornet is for those looking for a quieter season.

Association Vie Val d’Isere provides a card that gives you discounts in town at more than 90 local businesses as a seasonal worker. These include bars, shops, the cinema and supermarkets. The card costs around 21 euros, including off-piste insurance which is a great deal, and is well worth it if you are staying a season.

In terms of supermarkets, there is both a Casino Supermarket and Spar in Val though these are very expensive. You are better off shopping down the valley at the Super U where possible or Bourg St Maurice if you have a car to get you down and back. Cash Hotel 2000, between central Val and Le Fornet, has wholesale items for hotels and restaurants in the area.

Of the two resorts, Val has the better bar scene, while Tignes is more known for its nightclubs.

The nightlife at Val is among the best and liveliest in France, though it still falls short of the huge scenes at places like Ischgl and St Anton in Austria. The size of Val means that there are quite a few good places to explore, but you are fairly likely to bump into people you know when you are out.

As a seasonal worker, you will get plenty of discounts around town, especially with the Vie Val d’Isère card.

La Folie Douce is probably the most famous of the on-mountain après bars and is where people from Tignes and Val mix the most. It is located at the top of the La Daille gondola. You will find live music, DJs and plenty of drinks as the sun goes down.

Cocorico is another après-ski place that draws a large crowd. It is found at the Rond Point and has a nice atmosphere after a day working or riding.

Dick’s Tea Bar has après-ski and then kicks on into the night as a club. Other good late night spots in town are at Le Graal (with good electro), Le Doudoune (a favourite among locals), and The Fall Line (really comfy couches and themed party nights).

There are also quite a lot of events throughout the season which means there is hardly a down moment at Val.